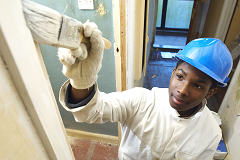 Most people want to belong, to be accepted as a member or part of something - be it a club, a friendship group, a social media network – the list goes on. Why is this so? It’s because belonging is a human need, just as important as food and shelter. It improves our motivation, health and happiness.

Often, we choose what groups we want to belong to. If you don’t float my boat, I will reject your LinkedIn invitation to connect and, of course, if we fall out we can ‘unfriend’ each other on Facebook! However, there are times when we don’t get to choose. Family, society…we take whatever we are given and try to make the most of it. And whether we thrive in these given groups is not just down to us – it is also down to how other members of the group interact with us.

Within this context I am delighted that the Social Security Advisory Committee has now completed its review of how society, in the form of government departments, interacts with young people aged 16 – 24 who are living independently. Do these interactions leave them valued, inspired and motivated to belong and to play their part well? Or do government policies demotivate this group and leave them as outsiders looking in?

This review matters because young people’s life chances matter…after all, they are the future. And for those who live independently it matters even more because, unlike many who have the benefit of supporting family – the famous bank of mum and dad – this group often don’t. Without that family support their interaction with society through the state becomes even more central to their personal and economic success.

Although our work has been partially limited by a lack of longitudinal data for this age group, in preparing this report for ministers, evidence immediately stood out as having the potential to both inform the government and, despite the data gap, to strive further to support young people living independently.

Secondly, most young people we met appreciate the support society offers them through the social security system. As one young person put it: ‘I would be on the streets without it’. However, many of them don’t actually know much about the wide range of support that is available to them. So, we can do better on giving them the right information at the right time. Indeed if we don’t, we leave ourselves in a position akin to writing an important letter and locking it away in a desk rather than posting it.

Thirdly, it turns out some of the young people we met had only £20 disposable income per month after paying their rent , fuel and other bills. I would challenge anyone to live on £20 a month and see how far they get! We must ask the question: is the funding available through social security enough for all young people? Should more be done for those who are right on the margins?

Fourthly, many young people living independently do not have the skills to manage well tasks like budgeting, negotiating, and handling relationships. Unfortunately, the complexity of their everyday lives introduces challenges that exacerbate this lack of skills and experience. It is hardly surprising therefore that managing their relationship with the state through Jobcentre Plus can be fraught, and depend often on the work coach they are assigned. Yet this relationship can significantly influence a young person’s life trajectory. All work coaches want to do the right thing, but some are understanding, empathetic and helpful whereas, unfortunately, others are not. When a young person is assigned to a work coach who is unempathetic or even harsh, a relationship that should be supportive and enable the young person to thrive can become adversarial. As the balance of power in the relationship resides almost wholly with the work coach, the mere thought of an upcoming appointment with them can leave that young person sweating over the fear of sanctions that may be, or are perceived to be, high-handed and unjust. This should never be the case.

Finally, I believe one of the best things we can do to foster that sense of belonging in young people is to help them gain the skills they need for education and/or employment which speaks to their talent, interest and abilities. This is also the route out of total dependency on benefits and it is why the Youth Obligation is a big deal. If it is done well, it will make a positive difference for so many and if it isn’t, it will be no more than another failed government programme. Doing it well means it must be flexible to meet each young person at the point of their need to keep them engaged. The Youth Obligation is in its early days but these are the very days in which we need to ensure we get it right so that it gets recognised by young people as a ‘good thing’ and not as one of those schemes they perceive as designed to punish recalcitrant young people!

A sense of belonging to something creates a stake-holding mentality in whatever that something is.  As a nation we cannot afford to leave any young people on the outside looking in – they should all be joint stakeholders in our society. I have no doubt that this report’s recommendations address head-on the feelings of many 16-24 year olds that they have no stake in their communities and their economy and so are entirely commendable.